Mitt Romney preparing for a brokered convention? Nancy Reagan remembered for ‘Just Say No’ and astrology; Bernie “just says no” to fracking, while Hillary remains noncommittal …

U.S. Fate 2016
Rank and File Republicans Tell Party Elites: We’re Sticking With Donald Trump [NYT]
My progressive and liberal friends, do not ignore this. You may not like Trump, but Republican voters do, and they aren’t taking kindly to attempts by party leaders to find a way to ignore what the people want and put their own man (presumably) of the rich and privileged in the White House. As I’ve said many times, it’s not about party politics anymore. It’s a class war. There are two major planetary cycles (Uranus-Pluto and Saturn-Neptune) in a rare interaction that is manifesting as insurrection. That’s why Trump is winning. As on the Democrat side, the only way to keep the people’s candidate at bay is going to be to resort to dirty tricks. Isn’t it ironic, though, that one of the ways the powers that be tried to sink Bernie’s campaign was to completely ignore him, while giving maximum news coverage to Trump. Looks like that strategy backfired big-time.

How the Republican Party created Donald Trump [WaPo]
At the core of Donald Trump’s political success this year are the grievances of a sizable and now vocal block of disaffected voters, many of them white and working-class, and a Republican Party that has sought and benefited from their support while giving them almost nothing tangible in return. But the Democratic “Party of the People” did? Are these reporters really that out of touch inside their Beltway Bubble? How many times can you say, “Saturn-Neptune square?”

Romney on NBC: Of course I’d take the nomination at the GOP convention [Townhall.com]
The writer asks if Romney knows something we don’t. Well, we do know that his fundraising organization filed a notice with the Federal Election Commission in January. Given the support for Trump, how do Republican leaders figure that a move like this would unite the party? I wouldn’t be surprised if we get a third party out of this election.

Will the GOP Implode? [James Zogby on HuffPo]
James Zogby is president of the American-Arab Institute, discusses why the Republicans loathe Trump and yet fear alienating him. He also weighs in the whole Romney thing. Good quotes and insightful. Zogby’s more famous brother, John Zogby, is the political pollster. Not that this has any bearing on anything, but they grew up in Utica, N.Y., which is where I went to high school.

Forecasting Elections [Naked Capitalism]
By Rajiv Sethi, professor of economics at Columbia University, writes:
This wild and crazy election cycle is generating an enormous amount of data that social scientists will be pondering for years to come. We are learning about the beliefs, preferences, and loyalties of the American electorate, and possibly witnessing a political realignment of historic proportions. Gee, could it have anything to do with that strange combination of planetary cycles I mentioned above? And which financial astrologer Ray Merriman is constantly talking about?

On Fracking, Clinton And Sanders Give Vastly Different Answers [Think Progress]
What have I been saying? This was one of the defining moments of the Democratic debate in Flint, Mich., if not the moment. Hillary Clinton finally was forced to reveal the deceit of her vague “I’m against it if they don’t do it safely” answers. They don’t, period, and Bernie said so. For which he was roundly applauded. If you don’t remember anything else, remember this.

Bernie’s top strategist: ‘Maybe they’re going to put him on the ticket’ [Politico]
Tad Devine, top strategist to the Bernie Sanders campaign, talks candidly with Politico and mentions the possibility of being on the ticket. You mean, as Hillary’s vice president? Please, say it ain’t so…

Hillary Clinton to Join Bernie Sanders at Fox News Town Hall on Monday [NYT]
Damn, she even flip-flops on whether to appear on a conservative news channel. Another attempt to be more Bernie? Last week, she told Fox she had a scheduling conflict. Or was it “travel restrictions?” Either she didn’t want to risk a scathing interview, or her campaign didn’t think Fox was a good platform for getting votes. When you’re ahead, it’s best to avoid risk and controversy. But Bernie wasn’t scared of Fox. He even said he’d debate Trump. And there’s a good possibility that Sanders will get some Republican votes. I’d be willing to bet she agreed only after cutting a deal with Murdoch about what the questions would be. Murdoch has contributed to Clinton’s campaign and once said he could “live with Hillary Clinton as president.” He probably could live with the ratings, too. There is no question that she’ll draw more viewers to the broadcast. It’s such a f—ing racket.

The Messenger
Nancy Reagan, an Influential and Protective First Lady, Dies at 94 [NYT]
Obviously, what I remember her for first and foremost is that she had the good sense to consult an astrologer. Unfortunately, she didn’t have the good sense to keep it under wraps. I wonder how many public officials consult astrologers but won’t say so for fear of being stigmatized like Nancy Reagan? To wit:

How Nancy Reagan Became Forever Linked with Astrology [Atlas Obscura]
In 1988, a former aide wrote a book that made her astrological beliefs a matter of public record.

Of course, there’s also this:

The Disastrous Legacy Of Nancy Reagan’s ‘Just Say No’ Campaign [Think Progress]
Just as it was with Scalia, upon her death, the news media are full of praise in remembrance of her style, grace, devotion to Ronnie, ad nauseam when many people feel like dancing on her grave but are afraid others will think they’re unkind.

The Gangbanksters
Exclusive: U.S. watchdog to probe Fed’s lax oversight of Wall Street [Reuters]
The probe, which had not been previously reported or made public, is the first by an outside agency into the perception that government regulators are “captured” by and too deferential toward the bankers they supervise, so that Wall Street benefits at the public’s expense. Surely the Fed must have told them to cut it out.

The Plutocracy
How U.S. companies are avoiding $695 billion in taxes[WaPo]
Apple, Microsoft and Pfizer were among the worst offenders, according to the advocacy group Citizens for Tax Justice.

Planetary Cycles
Time Warp: This Week’s Solar Eclipse Starts on Wednesday, But Ends on Tuesday [Digital Trends]
Because the path of the total solar eclipse crosses the International Date Line, it ends before it starts. Yeah, OK, time as we know it is a human construct, but nonetheless it’s a freaky idea. The symbolism is appropriate, too; the eclipse occurs in Pisces (according to the Western tropical zodiac), which is the sign of blurred boundaries and connecting with other dimensions of time and space. If you want technical details (so very not Pisces), check out NASA’s eclipse map. 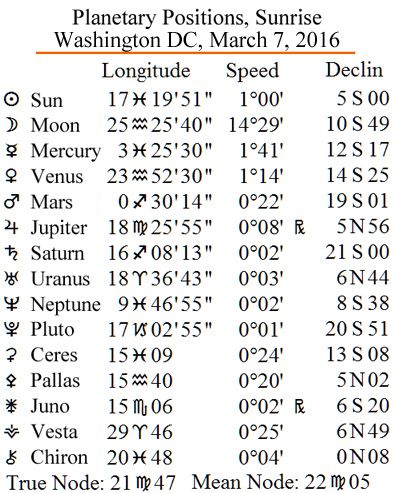