Media scramble to explain Bernie’s Michigan upset while proclaiming Hillary as Tuesday’s winner; Trump could be taken out at convention; warmest winter on record; risking death to protect the Earth…
U.S. Fate 2016
Michigan Says It Wants a Revolution [The Atlantic]
Bernie Sanders pulled off a stunning upset, on a night when much else remained unchanged—with Donald Trump and Hillary Clinton both adding to their overall leads. For the most part, The Atlantic has been fair in its coverage, and this headline is a good example. Other news organizations are downplaying Bernie’s shocking upset by making the story about Hillary’s increased delegate count, with the lead photo showing her arms raised in triumph. The truth is, she did increase the margin of her delegate count over Bernie, as The Atlantic notes as the second point in its summary. He was 25 points down in the polls. He was expected to lose. The question was by how much. He and his staff didn’t even stick around to make a speech. Bernie went to bed. The corporate media are part of the Clinton machine, but they are becoming increasingly irrelevant.

5 numbers that explain Tuesday’s election results [Politico]
Polls appear to have underestimated the number of Republicans and independents who crossed over to back Sanders. According to exit polls, only 69 percent of Democratic primary voters identified as Democrats; another 28 percent said they were independents, and 3 percent were Republicans. This has been apparent to anyone who has a brain and a mind open enough to use it. Hillary Clinton is popular among Democrats who fancy themselves as “liberal” because they donate to public television. The article explains that Trump won on some of the same issues as Sanders. The article doesn’t explain why its lead photo is of Hillary Clinton.

What the Stunning Bernie Sanders Win in Michigan Means [FiveThirtyEight]
Nate Silver, golden boy among pollsters, is peeing all over himself for his failure to predict the outcome of the Michigan primary. Right up until the polls were closed, he gave Bernie a 1 percent chance of winning. It wasn’t Silver, but his sidekick Harry Enten who manned up and ate “humble pie.” Nate instead used his amazing 20/20 hindsight to write about Rubio’s failure:

Marco Rubio Never Had A Base [FiveThirtyEight]

How Trump Could Be Blocked at a Contested Republican Convention [NYT]
A coalition of Republicans is banking on a scenario in which Donald J. Trump fails to reach the 1,237 delegates required to secure the party’s
nomination before its July convention, creating a potential opening for another nominee as the delegates vote on the convention floor.

Michigan mayor says he was nearly kicked out of Dem debate [The Hill]
His crime? He said nice things about Bernie. While sitting behind Debbie Wasserman-Schultz. I’ve been saying it for years, people: It’s not necessarily the Republicans who are going to bring us a totalitarian government. I debated whether to put this link under “Red Pill.”

Propaganda Wars
Washington Post Ran 16 Negative Stories on Bernie Sanders in 16 Hours [FAIR]
Media watchdog Fairness and Accuracy in Reporting counts sixteen negative stories about Bernie Sanders in The Washington Post in the hours before the Democratic debate in Flint, Mich. Two of those were sort of neutral, but the Post ran no positive stories about Sanders. FAIR points out that the Post was purchased in 2013 by Amazon CEO Jeff Bezos, who is worth an estimated $49.8 billion. Bezos hangs with the Clintons, and got a $16.5 million contract from the State Department while Hillary Clinton was secretary. She can’t say she wasn’t personally involved. The exchange is in her e-mails.

Phobos & Deimos
Report on Israel’s aid subversion makes shocking reading [Jonathan Cook]
“While Europe may think of itself as part of an enlightened West, using aid to defend Palestinians’ rights, the reality is less reassuring. The aid may actually be making things worse,” writes Cook, who reports from Nazareth.

Time for a new Sykes-Picot Agreement to fix the Middle East [Reuters]
Op-ed by Peter Van Buren, tauthor of We Meant Well: How I Helped Lose the Battle for the Hearts and Minds of the Iraqi People and Ghosts of Tom Joad: A Story of the #99 Percent. Van Buren spent 24 years at the State Department and has deep inside knowledge.

Map: 116 environmental activists were killed in just one year [Grist]
Most of them were protesting hydropower, mining, and agribusiness projects.

Hygieia
ObamaCare and the Crapification of Health Care: A Case Study, and a Growing Collection of Horror Stories [Naked Capitalism]
NC’s Lambert Strether received an e-mail from a reader who spent several months out of the year in Belgium while legally required to have Obamacare. His experience is truly is a horror story. Lambert then got the idea to search through comments on NC for other stories. That, in turn, generated more comments. My situation is mild by comparison, but here we have ample evidence that Obamacare has been a nightmare. Too bad Bernie Sanders can’t say so outright without being criticized for criticizing Obama. We need a single-payer system, we need it , and the only candidate who is even talking about it is Bernie Sanders.

The Nation’s Wealth
Gerald Friedman Responds to the Romers on the Sanders Plan: Different Models, Different Politics [Naked Capitalism]
Read the comments as well. The NC community is one of the most thoughtful and intelligent on the Internet.

Shadow Government
You Should Care About Apple, Your iPhone and the FBI [Peter Van Buren]
Some 40% of Americans agree that Apple should unlock the phone. And just in case you still don’t get it, remember the government took the provocative step of asking the court to unseal the case, which would normally be secret by default. I still remember Michael Lutin’s talk at the National Press Club. He was talking about Pluto entering Capricorn and the rise of the surveillance state. That was in 2008. It got worse with the Uranus-Pluto square of 2012-2015. The day that Edward Snowden went missing, the square was within half a degree of exact. 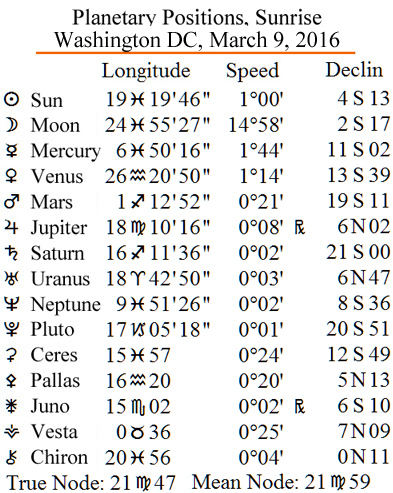