Romney backs but doesn’t endorse Cruz; profile of a Hillary voter (sort of); NYT’s ridiculous excuse for stealth editing; the improbable event that will alter the course of the election; the incomparable Ray Merriman . . .

Romney Backs Cruz in Effort to Block Trump [Time]
So Romney is “backing” but not endorsing Cruz. Is a Romney wet dream of becoming the GOP nominee? Do I tempt Mercury the Trickster by asking how much weirder this election season could get?

Five answers about an open Republican convention in Cleveland [Atlanta Journal-Constitution]
Here’s a top-dog RNC dude saying there’s a one-in-three chance of an open convention, and that if Trump comes in as the presumptive nominee, the RNC won’t change the rules, as some media outlets are reporting, to shut him out. Nope, they aren’t going to rig the system. But then the committee will discuss rules at its April meeting. Sure sounds to me like they could change the rules, but hey, not “significantly.”

Hillary Clinton Spent Most of Her Weekend Alienating Progressive Voters [New York]
This article was written the day before the March 15 primaries, three of which Clinton won by a wide margin and two of which essentially were ties. So in the end it didn’t hurt her at all to alienate progressives – the real ones, not the ones who call themselves that to disguise their centrist and right-of-center policies. Indeed, it is starting to appear that her campaign is going to throw Sanders supporters under the bus and court a more “moderate” faction of both Democrats and Republicans. Anyone who truly wants to see real change needs to know this immediately and start sharing it.

Who Is the Hillary Voter? [The New Republic]
The media is obsessed with the Sanders voter and the Trump voter. Yet it is the Hillary voter who may have the last laugh. Much of this article is BS, starting with Eric Sasson’s ridiculous assertion that the media are biased against Hillary (and yes, Eric, “media” is plural. It’s “media are” and “media have”). However, I decided to include it here for balance and, more importantly, because Eric’s question is valid. I’ve asked myself the same thing.

I agree with him that Hillary isn’t getting votes from thousands of people holding their noses. Some of her supporters are very devoted and obviously love her. His point also is well-taken that the “Hillary voter” wouldn’t dream of storming the Bastille. No, the Hillary voter is the one who follows Marie Antoinette’s every move to see what she’s wearing, what color palette she chose for her living room, who she invited to her ball, what they ate, who performed, and who didn’t get invited. Hillary is the centrist candidate of the Establishment Democratic Party. And that Establishment happens to have a massive party machine, which includes prominent people in the media.

Poll: Voters back Sanders as the next commander in chief [Reuters]
This is a pretty big deal. Not so long ago, voters saw Sanders as honest, but by large margins though Hillary Clinton had more experience to be in charge of the nation’s military. Much of the change is likely to do to exposure. Six months ago, not many people even had heard of him. But I suspect that Tulsi Gabbard’s endorsement also counted for a lot.

‘Don’t Say I Walked Away,’ Bernie Says After Ending Local News Interview [BuzzFeed]
What this writer says about Hillary supporters is true. Some commented that their candidate sat through 11 hours of tough questions before the Benghazi committee and Bernie couldn’t take four minutes. It’s just amazing that the entire video is online, anyone can watch and see what happened, but still people will spin it to fit their point of view. How ironic is it that it’s an outlet like BuzzFeed that takes the time to get it right? As this article explains, the reporter had gone past his allotted time, and it’s not like Bernie raced out of room.

Bernie Sanders Says He Won’t Seek Recount in Missouri [NYT]
Typical Bernie. He says it would cost Missouri taxpayers money, and for what? A couple of delegates. That’s all Hillary got by barely squeaking by him. As I recall, he had the same attitude in Iowa.

What Americans Don’t Get About Nordic Countries [The Atlantic]
When U.S. politicians talk about Scandinavian-style social welfare, they fail to explain the most important aspect of such policies: selfishness.

Marco Rubio Blames Failed Campaign on Unfair Media Coverage [New York]
I agree with the author that he has a valid point. But he can’t blame his failure on the media alone. Bernie Sanders has had the same problem with the media, if not worse, and he’s still very much in the game. This just wasn’t Marco’s year. We don’t have a birth time for him, but in his chart set for noon (my preferred method), he has a couple of powerful .

Were Changes to Sanders Article ‘Stealth Editing’? [NYT]
Yes, according to the The New York Times “public editor,” which I gather is something like what we used to know as an ombudsman. But the Times editorial board made excuses that were so ridiculous that they can’t possibly have expected anyone to believe them. It didn’t even sound like they cared, but why would they, when most of the complaints came from supporters of Bernie Sanders?

I stopped reading the Times after one of its top reporters, Judith Miller, was busted for using information supplied to her by the CIA to allege that Saddam Hussein had weapons of mass destruction. Miller’s reporting was cited by the Bush administration as justification to invade Iraq. I could never trust it again after that, and given the limited number of hours in a day, it seemed to me a waste of time to read an unreliable source of news. Just when I didn’t think it could sink any lower, this incident occurred. Not only did the editors insult readers with their response, but the paper is unrepentant. On Friday, it completely fabricated this story:

Obama Privately Tells Donors That Time Is Coming to Unite Behind Hillary Clinton [NYT]
The entire report was based on unnamed sources, but that didn’t stop other media outlets from running with it or the pundits from blathering on about it for hours with invited guests who enlightened viewers with their opinions of what might have happened in a private meeting they didn’t attend. A spokesman for Obama refuted the story at a White House press conference on Thursday, but the Times never bothered to add a correction, and the story remains online exactly as it was. Compare the failure to run a correction on this story to their assertion that the above story needed to be corrected, and decide whether one of the nation’s oldest and formerly most respected newspaper is doing PR for the Clinton Global Dynasty.

Obama Didn’t Back Clinton at Private Fundraiser: Earnest [Bloomberg]
Bloomberg reported the denial by White House spokesman Josh Earnest immediately, in a stand-alone story. How many reporters were at that press briefing? How many of them filed stories?

Merrick Garland on Environmental Protection: Why Advocates Are Reassured [Inside Climate News]
The rulings of Obama’s Supreme Court nominee position him squarely in the mainstream of environmental jurisprudence, a big shift from Scalia.

The New Truth About Free Trade [Robert Reich]
The new-style agreements increase worldwide demand for products made by American corporations all over the world, enhancing corporate and financial profits but keeping American wages down. The fact is, recent trade deals are less about trade and more about global investment.

Forecast preview for the week starting March 21, by Ray Merriman, founder and CEO of the Merriman Market Analyst. [MMA Cycles]
Right now, the world is about to enter a wild time band when an incredible mutable T-square involving Jupiter, Saturn, and Neptune, will enter its three-month peak (March 23-June 29). . . . Anything goes. Everything changes, back and forth, especially concerning decisions, agreements, and treaties. You think you have a deal? Think again. No deal.

Meet the Democratic Socialist Who’s Running for New York State Senate [The Nation]
Debbie Medina, an organizer in a historically Puerto Rican neighborhood in Brooklyn, is running for the State Senate in New York’s 18th District. This is exactly what Bernie Sanders means when he says the revolution is about more than voting for a democratic socialist for president and then disengaging.

Collapse of the Empire

Voting To Destroy the Establishment [Washington’s Blog]
A long, thought-provoking read. If you don’t have time, take away this one point: History is dominated by improbable events. Improbably events already have overtaken the U.S. presidential election. There likely will be more improbable events, but we don’t know what they will be. This view is reflected in long-term planetary cycles dominating 2016. We can forecast scenarios and possibilities, but it’s virtually impossible to foresee events that have no precedent in human history.

Everything you need to know: Vernal equinox 2016 [EarthSky]
The 2016 vernal equinox (fall in the Southern Hemisphere) is March 20 at 4:30 UTC, March 19 in the central United States and all time zones west. 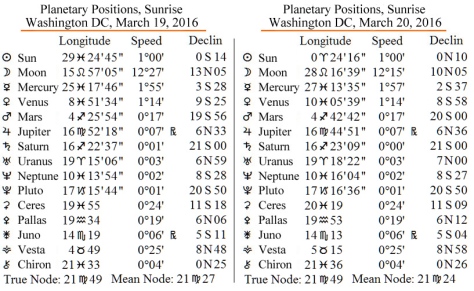